With the Magnitsky laws passed through Parliament, we will work with parliamentarians to have key abusers of Tibetan human rights sanctioned under the Magnitsky Act.

This year we will be asking parliamentarians and officials to sanction CCP Officials abusing the human rights of Tibetans.
The Magnitsky laws, as amended and improved with your help, passed the Senate with unanimous support on 1 December 2021, and the laws will allow the Australian Government to sanction individuals and entities responsible for “egregious conduct”, like threatening international peace and serious human rights violations.
A Magnitsky Act in Australia is our best chance to hold to account members of the CCP responsible for the worst human rights abuses in Tibet.

What does this mean?

The Magnitksy act was named after a Russian tax lawyer Sergei Magnitsky after he was beaten to death in prison in 2009 after investigating Russian officials involved in Fraud.
This means that Australia will have the ability to impose targeted financial sanctions and travel bans against individuals, their families, and entities determined to be involved in such sanctionable conduct wherever it occurs, such as human rights abuses.

What are the next steps?

Thank you once again for your part in winning this important first step of the campaign with us.

Please donate so we can continue this campaign and hold CCP officials to account.

Donate to Support Our Work 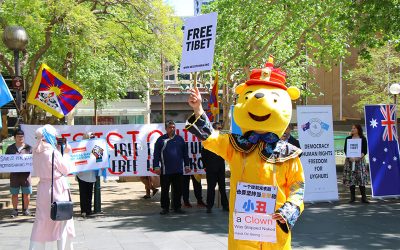 The Australian Government has now responded to recommendations about creating a Magnitsky-style law to impose financial and visa sanctions against human rights abusers. The response falls short of our expectations and remains below the gold standard set by our allies. However, there are some important improvements now proposed for Australia’s existing sanctions regime.

END_OF_DOCUMENT_TOKEN_TO_BE_REPLACED 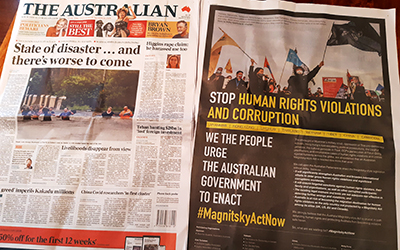 We have collaborated with a coalition of groups from across the Asia-Pacific to have a full-page advertisement published in The Australian newspaper calling for parliamentarians to pass the #MagnitskyActNow.