Reflections for Tibet from COP25

This month I attended the UN Climate Change Conference to learn, connect and take our Tibetan voices into the most critical debate of our time.

My week in Madrid had moments of despair at the lack of urgency in the face of the escalating climate emergency, but also moments of real hope as I witnessed the resolve of the global movement for climate justice. Here are my reflections for our movement as we prepare for 2020, a significant year in our fight to save our planet and Tibet, the Third Pole. 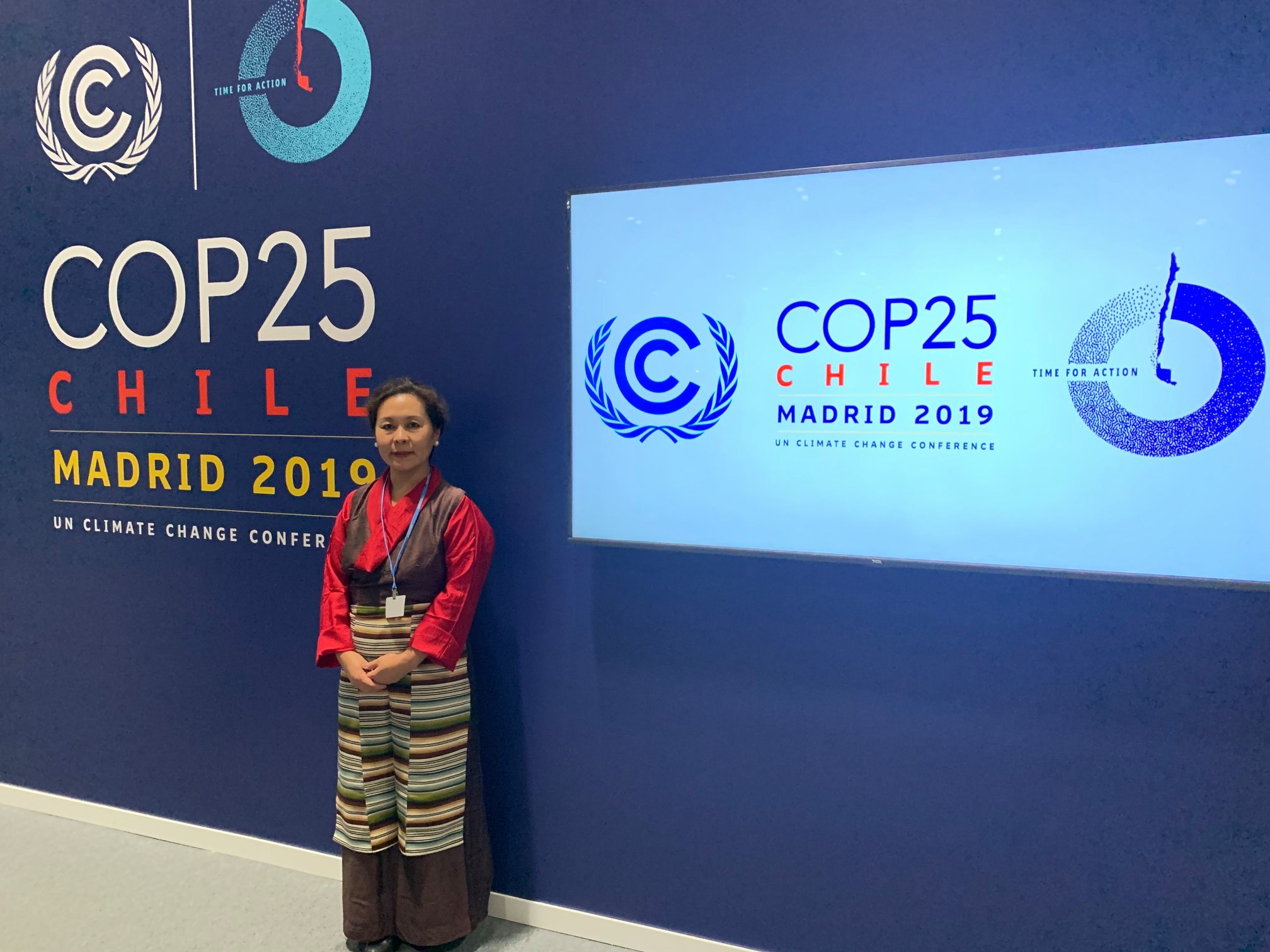 1. The climate crisis and colonisation

As Tibetans, we tend to believe our struggle is unique. COP25, and in particular the opportunity to learn from Indigenous climate warriors, taught me that we have much in common with all those on the frontlines of the climate crisis. And that we should seize the opportunities to band together.

Tibetans do not generally characterise ourselves as Indigenous people but rather as a nation under occupation. Nonetheless, we have much in common with Indigenous peoples around the world. We have been the stewards of Tibet’s vast grasslands for thousands of years, living sustainably and protecting the Roof of the World. And we have a vast trove of traditional knowledge and wisdom for caring for our environment.

The history of environmental destruction and over-consumption, leading to today’s ecological crises, has been accompanied by centuries of land grabbing, forced displacement and occupation. In Tibet, this has been playing out for many decades, and continues to this day. China, the world’s biggest climate polluter, continues to plunder our homeland and displace Tibet’s nomads from their ancestral land.

Returning control of Tibet’s land and resources to Tibetans has to be at the heart of any response to the climate crisis on the Tibetan plateau. Just as we know that the best way to protect the Amazon – another area of importance to the global climate – is to uphold the rights of the traditional owners. If you read ATC’s report An Iron Fist in A Green Glove, then this will not be new to you. Having experienced COP25, where the voices of Indigenous peoples were stronger than ever, my conviction in this truth has only grown stronger.

2. Just highlighting the importance of Tibet is not enough.

Over the last few years, our movement has made some progress in bringing the world’s attention to the importance of Tibet as the water tower of Asia. And how the melting of Tibet’s glaciers is a profound threat to the lives of millions of people across the region.

This is important. But in itself is not enough. We need to communicate, as clearly as possible, why Tibetan self-determination is part of the solution. And along with that, we need to challenge China’s green rhetoric that is swaying the COP community.

By now, the world is well aware of the contradiction of China’s investments in renewable energy while continuing to be the world’s biggest greenhouse gas emitter. But what many still don’t know is how China is stripping the Tibetans of their livelihoods, identity and dignity under the disguise of conservation and development. Our job is to ensure the world doesn’t fall into China’s ‘green colonialism’. This becomes all the more urgent as China looks set to unveil new national parks across Tibet in 2020, the same year when it will also host the UN Biodiversity Conference. A global platform that will be used to promote Xi Jinping’s version of ‘ecological civilisation’.

My frustrations arose from the way China manages to silence critics at the UN. Nations know that they can criticise the US or Australia for their greenhouse emissions and still keep trading with these countries, but they’ve been led to believe they can’t have it both ways with China. Civil society groups, either wishing to maintain their offices in Beijing or finding it too hard to lobby China, also tend to give it a free pass.

China is asserting greater dominance in the UN space, more so as the US retreats. Not only is China the second-largest UN donor and the largest contributor of peacekeeping troops, but it is also seeking greater roles in environmental and development agencies. This year’s election of the first Chinese head of the UN Food and Agriculture Organisation is the latest example.

Our work is cut out for us. This calls for a stronger commitment and a long-term strategy from our movement, including thinking carefully about our narrative, the most strategic points of intervention, and who our most potent allies might be.

As anyone who has been inside the crazy world of international climate negotiations knows, it can take years to understand the process and learn how to have a real impact. Sure, we can busy ourselves distributing flyers and making noises on the fringes. But to make an effective intervention, we need to get inside the camp. And that takes a serious strategy and investment of resources.

While I am proud of what the small Tibet team accomplished in Madrid, I quickly became aware that we can achieve so much more if we were better prepared and had a clearer understanding of what has been going on throughout the year.

In other words, our preparations for COP26 need to begin now.

Some of the most critical discussions happen not at the COP but during the series of inter-sessional meetings throughout the year. For example, COP25 agreed to establish a special dialogue on land and climate, creating an opportunity to discuss the role of land governance (for Tibetans, insert: nomad rights) in increasing climate protection. We need to be aware of these opportunities and muscle our way in to the action.

4. COP25 was important. But it is COP26 in Glasgow where things are going to get real.

Next year’s COP was always going to be the main game. COP25 was merely a precursor, tasked with ironing out a number of technical details and rebuilding political momentum.

Let me put these successive COPs into context. In 2015, governments reached the Paris Agreement and ushered in a new era of international collaboration to confront the climate crisis, including the commitment that all countries would strive to limit global warming to 1.5°C. But the Paris Agreement is really only a framework, and each COP since has been about negotiating the various rules and guidelines necessary for its full implementation. COP25 needed to finalise those rules.

Also, the Paris Agreement depends on countries putting forward their own “nationally determined contributions” (NDCs) to its goals. That is, countries set their own targets for reducing their emissions, and the hope is that peer pressure between countries will lead to progressively stronger action. But right now, if you add up the targets that each country has committed itself to, collectively they fall catastrophically short of what is required. Next year’s COP is the deadline for all countries to get their house in order and submit new, stronger commitments. In other words, the decisions made by governments between now and the end of 2020, and especially the big emitters like China, will quite literally determine the fate of humanity.

As it happens, the final outcome of COP25 meant that COP26 has now taken on an even greater relevance to Tibetans than first anticipated. Governments failed in Madrid to finalise the last piece of the ‘Paris rulebook’ – the rules governing Article 6, which is all about global carbon markets.

The rules for Article 6 need to include safeguards to protect human rights and the rights of Indigenous peoples. But governments failed to reach agreement on that, key opponents being Brazil and China among others. Seeing no deal as better than a bad deal, governments decided not to conclude negotiations on Article 6 at COP25. This will now be taken up next year in Glasgow.

At COP26, governments must finally come to the table with stronger commitments to ending climate pollution, and COP26 will also see human rights and the rights of Indigenous peoples take centre stage again. For Tibetans, the stakes could not be higher. Let’s get ready!

We thank the Tibet Policy Institute at the Central Tibetan Administration (Tibetan Government-in-exile) for inviting us to join the Climate Action for Tibet campaign in Madrid.

Donate to our Hope for Tibet appeal 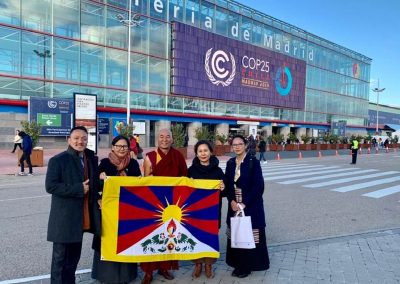 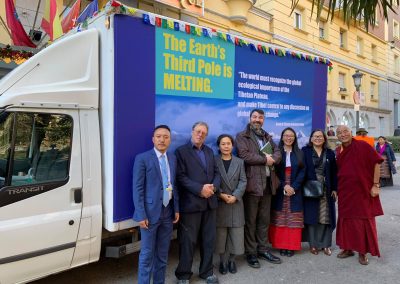 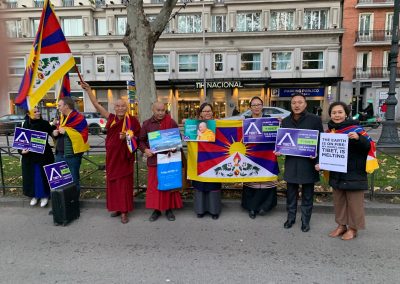 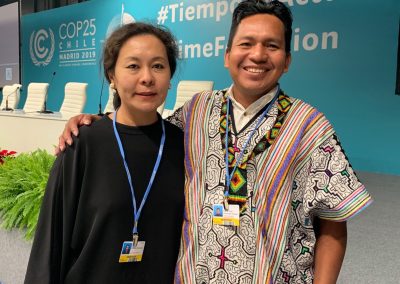 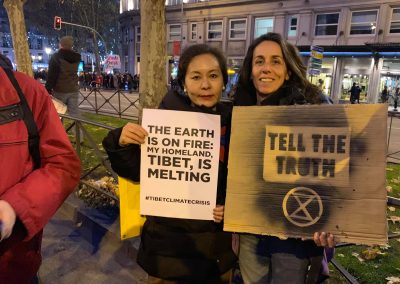 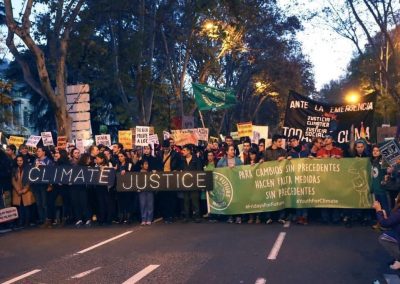 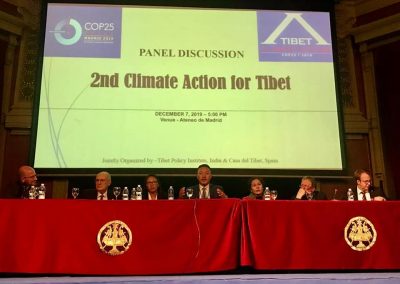 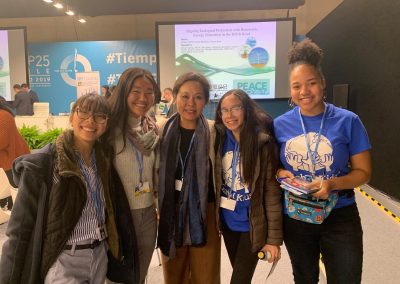 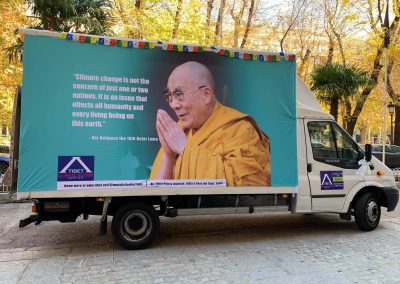 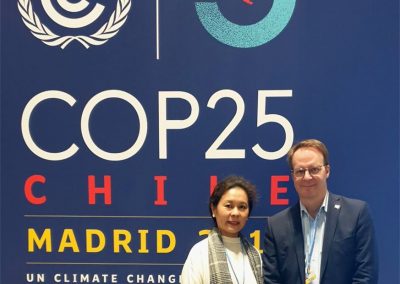