What’s been happening in Tibet during the Olympics?

Use of spyware to increase surveillance on Tibetans

There are reports that Chinese authorities are forcing Tibetans in Dragyab County and Chamdo, who have overseas contacts, to install spyware on their mobile phones in order to keep watch on them. The Dharamshala-based research group Tibet Watch said that local sources in Tibet had confirmed the use of cell phone spyware that actively monitors Tibetans with contacts in exile.

“China has aggressively enforced the use of software in the phones of concerned individuals. The local source in Tibet has told us how the authorities keep an eye on everything they do on their phones. The situation in these regions has become highly sensitive. From 2017 to 2021, what has now transpired is that even families are finding it difficult to contact their loved ones. Now the Government suspects anybody who has any contact outside,” the research group reported.

This new surveillance tactic was recently introduced, requiring individuals to install an application on their phones. The application reportedly allows unprecedented access to phone data and leaves the person vulnerable to all sorts of intimidation from the state.

“Anyone found with photos and videos deemed “politically sensitive” by police authorities and contacting Tibetans living outside Tibet were arbitrarily detained for two to three months. They have also been kept under surveillance upon release and subjected to restrictions on movement,” the report from Tibet Watch further revealed.

A report has emerged of a Chinese police surveillance unit operating, apparently for the first time, inside a Buddhist monastery as part of a renewed crackdown on Tibetan Buddhist religious institutions. Officers were reportedly installed this year at the Palyul Thartang Gonchen Monastery in Golog Tibetan Autonomous Prefecture (incorporated into Qinghai province).

“Though there was already a surveillance police unit put up by authorities outside the premises of the Palyul Tharthang Gonchen Monastery in Golog, this year they have added another one inside the premises of the monastery near its community hall,” the Tibetan reported to Radio Free Asia. “A surveillance team member has also been posted by the Chinese government in this unit to scrutinize monks and their daily activities,” he said.

This report also confirmed the use of surveillance via an app  “Chinese authorities have also installed a specific app on their mobile phones to identify and track their conversations, so it’s not safe for the monks to communicate with Tibetans in exile,” the witness has said. 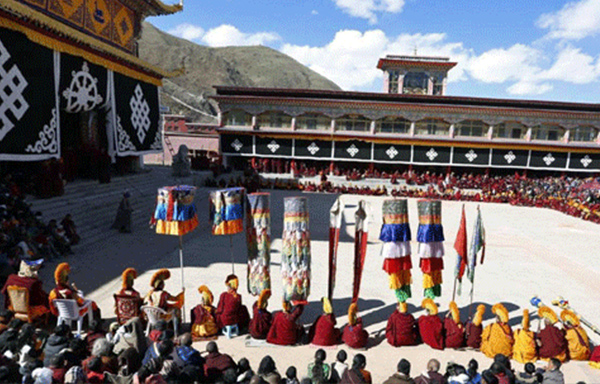 On 14 Feb 2022, a report emerged that Tibetan nomads were being sent to labour camps. In the lead up to the Olympics, authorities in China’s Tibet Autonomous Region were detaining more nomadic Tibetans in Drago county and sending them to labour camps for having content deemed politically inappropriate on their cell phones.

An unnamed source has reported, “Many Tibetans were detained in January after Drago county police searched their phone data in Likhog town. Most of them are detained in a labour camp in Thangnagma.”

“Chinese authorities have not even spared the most remote Tibetan areas for that matter, and Chinese police have been threatening and searching their cell phone data for sensitive information specifically from the exile community,” said Ngawang Woebar, a former political prisoner now residing in Dharamsala.

Before the Olympics, Tibet was already ranked as the least free country in the world by Freedom House. This snapshot of incidents shows that while the world is watching a sporting event, Tibetans in Tibet continue to suffer under the oppression of the Chinese Government.