ATC and Me: Alex Butler

From selling raffle tickets to raise money for the Tibet cause in the 80s to winning our recent raffle and donating the prize back to generate more funding for campaigns, Alex Butler has a long and dedicated history of supporting the people of Tibet’s struggle for meaningful autonomy. Alex has held a variety of positions with Australia Tibet Council – from action group convener to National Secretary. In recognition of her amazing efforts, earlier this year at our annual general meeting, Alex was given the ‘Damien Lovelock Award for meritorious service.’

Alex answered a few questions for us, offering a window into her decades long advocacy work for Tibet. 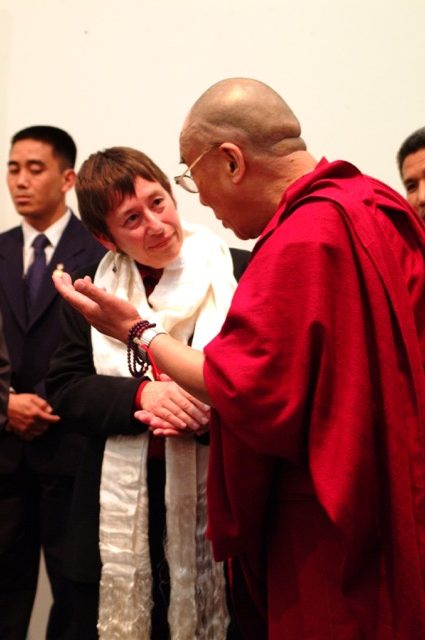 Please describe your introduction to the Tibet cause. How did you first come to learn about what was happening in Tibet?

I was almost completely ignorant about Tibet and the Tibetans until the late 1980s. When I studied Chinese politics at the University of Melbourne in 1970, the Tibetans were dismissed in passing by the lecturer as a long lost cause. It was a pity, I remember him saying, but … At least he was slightly more sympathetic than the Maoists on campus who thought it was great that the reactionary ruling class Tibetans led by the Dalai Lama had fled into exile leaving the Tibetan masses to enjoy their new life as part of Communist China.

So in the absence of any up to date information I had no reason to doubt that the Tibetans, whether happily or unhappily, had become resigned to their fate.

Then, very gradually, in the 1980s, this began to change, as Australians of my generation, including friends and family members, who had been backpacking in Asia, came home enthused by the Tibetan exile communities they had encountered in Nepal and India. The stories they told, and their photos, didn’t fit at all with the image of a useless defeated aristocracy. Instead, they described vibrant communities in which Tibetan culture, and especially Tibetan Buddhism, was flourishing.  Many of them became Buddhists and as a result in August 1982, the Dalai Lama made his first visit to Australia. It was a very low key non-political trip, and it didn’t occur to me to attend his public talk in Melbourne (at a suburban town hall) but I was aware that he was in the country and that it was a significant event.

Later in the 1980s, I began to notice occasional media stories about protests by Tibetans inside Tibet. It slowly dawned on me that perhaps the Tibetans, whether living in Tibet or in exile, were not resigned to Chinese Occupation at all.

The late 1980s were a time of political turmoil and change in many parts of the world. In eastern Europe, the Soviet Union was beginning to collapse as people asserted their human rights and the Berlin Wall fell. In South Africa, Nelson Mandela was released from prison in a step that would eventually lead to a peaceful end to apartheid. In China itself, huge demonstrations by students demanded human rights and democracy. Although these ended in tragedy in Tiananmen Square, one result was that governments in the West became willing to criticize the Chinese regime – our own Prime Minister, Bob Hawke, wept in Parliament as he offered all Chinese students in Australia the right to stay here.  In this atmosphere, it didn’t seem impossible that the Tibetan people might also have an opportunity to determine their own future..

Sometime in mid 1989, I ran into Gabriel Lafitte, a journalist whom I had met when I worked at the ABC. He had since become a Buddhist and a Tibet activist – one of a handful in Australia at the time. He was selling raffle tickets to raise funds for the Tibetan cause, and I offered to take a few books to sell too. I remember being pleasantly surprised by how easy it was to sell the tickets – people didn’t necessarily know much about Tibet, but they were definitely sympathetic to the Tibetan people, and especially the Dalai Lama.

Can you please share about when and how you became involved with Australia Tibet Council?

Perhaps because of my enthusiastic raffle ticket selling, Gabriel Lafitte asked me if I’d like to come to a meeting of people interested in bringing the Dalai Lama to Australia again. There were maybe 30 or 40 people at the meeting, which was held in a large suburban house. When I arrived, the only person I knew was Gabriel – but in fact some of these strangers were to become my closest colleagues in the years ahead. One of these was businessman George Farley, who chaired this initial meeting and would later become the first President of ATC.

George had had some involvement in the Dalai Lama’s 1982 visit  – in fact, the Tibetan leader had stayed at his North Fitzroy home while in Melbourne. But it soon became clear that the proposed future visit would be on a totally different scale and that security issues alone would make it impossible for the Dalai Lama to stay in a private home.  Likewise, the Dalai Lama’s rising international popularity meant that there would be no public talks in suburban town halls – instead, organisers would be seeking out the largest venues in each capital city.  Significantly, this second visit would include not only a spiritual but also a political aspect.

The outcome of the meeting was that a committee was set up to progress the idea of a visit to Australia by the Dalai Lama in 1991 (although it was later postponed to 1992). I was excited to be invited to join the committee and looked forward to getting to know the other members, most of whom (but not all) were Buddhists.

In October, the Nobel Peace Prize Committee announced that the 1989 Peace Prize had been awarded to the Dalai Lama “for his consistent resistance to the use of violence in his people’s struggle to regain their liberty”. Awareness of the Dalai Lama and the Tibetan cause skyrocketed.  By this time, I had worked out that there was an organization called the Australia Tibet Council which had been established in 1988 specifically to support human rights and self determination for the Tibetan people and that several of the people on the Dalai Lama visit committee were also active in ATC. I was immediately interested in becoming involved.

The first official ATC initiative I remember participating in was collecting signatories (and money) for a full page advertisement in “The Australian” congratulating the Dalai Lama.  Even today, 40 odd years later, I am Impressed by the diversity of the 300 individuals and organisations who signed up, including senior politicians from every party, leaders from all the major faiths (including two archbishops), and a swathe of artists, writers and performers, among them CircusOZ, historian Manning Clark, artist Albert Tucker, and novelist Patrick White.

What inspired you to support ATC?

I was inspired to become an ATC activist because of the legitimacy of the Tibetan people’s cause; the extraordinary leadership shown by the Dalai Lama, and in particular his commitment to nonviolence; and the fact that we seemed to be at a point in time where there was a rare opportunity for the Tibetan people to achieve freedom. Having worked in the media and the trade union movement, I also had some skills in communication and organising which I thought might be useful. And last but not least I really liked the people who were involved in ATC – they were smart, committed, and fun.

What are some of the roles you had and activities you did?

My first “official” position was as convenor of the Melbourne Action Group, although ATC in those early days didn’t have a lot of structure. There was a National Executive of 4 or 5 people  and Action Groups in Sydney, Melbourne and Canberra. ATC had no office or paid staff, we were all volunteers operating out of our lounge rooms. By today’s standards, communications technology was primitive. There were no mobile phones. Answering machines were a rarity. Faxes were cutting edge. Computers used a text based operating system called MS-DOS – all you could see on the screen was green unformatted text on a black background. No Windows, no pictures, no sound.

The Melbourne Action Group met fortnightly. The meetings were open to all ATC members and friends and I remember them as being well attended and enthusiastic. We kept up a constant schedule of protests, street stalls, letter writing campaigns, public talks, and fundraising dinners (fortunately, Melbourne’s first Tibet Restaurant opened at about this time, providing the perfect venue).  By the end of 1990, as ATC’s membership extended and expanded across the country, it became clear that the organization needed a slightly more formal structure and I moved into the newly created position of National Secretary. But that, as they say, is another story …

Is there a particular issue or campaign area that you are most interested in? If so, which one and why?

I have always been particularly interested in the empowerment of Tibetan women, and the campaign that I most enjoyed working on was aimed at making it possible for exiled Tibetan women to participate in the United Nations Fourth World Conference on Women held in Beijing in 1995.  It was an international campaign, led by the Tibetan Women’s Association based in India and including women from all the major Western Tibet Support Groups. Having made a commitment to the UN that all women could attend the conference and that the venue would be neutral ground, the Chinese government, predictably, then set about refusing visas to every exiled Tibetan woman who applied.  Despite their best efforts nine exiled Tibetan women living in the West made it to the conference, including two wonderful Australian Tibetans Dorji Dolma and Kesang Wangmo. Although they were subject to constant harassment, surveillance and attempted intimidation by Chinese officials, the nine women bravely staged a silent protest on the morning of 1st September – the first and only Tibetans ever to hold a protest demonstration on Chinese soil. 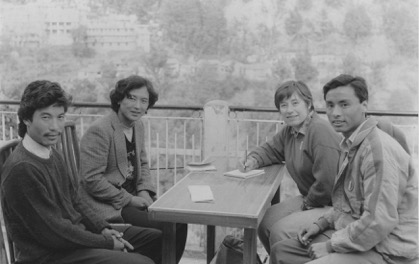 Alex in Dharamsala in 1993, at the Refugee Reception Centre, with recent arrivals from Tibet. She is interviewing them to share their stories as part of her work with ATC.